Project RESOLVE is a regional strategy for shifting the plastics, metal-casting, and transportation industries to a circular economic model to address plastic and waste pollution that ultimately affects the health of freshwater supplies such as Lake Erie. RESOLVE will advance manufacturing competitiveness and environmental vitality in parallel rather than in traditionally oppositional actions.

The initiative leverages regional differentiators and strengths, including manufacturing strongholds in plastics, metal-casting, and transportation; the expertise of Penn State Behrend’s plastics engineering program; university regional strength in the environmental sciences, and proximity to Lake Erie.

RESOLVE would establish the Erie region as the leading destination for companies looking to meet the manufacturing models of tomorrow in the plastics, metal-casting, and transportation sectors. To implement RESOLVE, a diverse set of partners are now assessing and addressing both opportunities and challenges in technology development and adoption, recycling infrastructure, measurement standards, telework capability and capacity, site development, entrepreneurship, and impact on underrepresented communities disproportionately affected by plastic and waste pollution.

This 10-year, $120 million regional strategy has multiple partners all implementing different aspects of the project. A project this expansive will be implemented in phases. For Penn State Behrend, phase I of RESOLVE , as indicated on the graphic above and detailed as follows:

This Center will house manufacturing-focused laboratories where industry works with students and faculty to develop, test, and implement next-generation technologies and practices. For manufacturers, the center will be a sandbox for innovation—for advancing technologies without having to divert resources from day-to-day, bottom-line activities.

The Center for Manufacturing Competitiveness will also host the first full-service integrated heavy-haul battery testing facility in the nation. This capability will establish northwestern Pennsylvania and the surrounding region as a global powerhouse for the design, development, and manufacturing of next- generation heavy-haul transportation equipment, bolstering the competitiveness of an industry in which Wabtec is a chief player.

In addition to industry-specific laboratory facilities, the Center will host a full-scale recycling line for manufacturer testing of an array of materials for their recyclability. As part of the recycling focus, the heat, carbon dioxide, and moisture from composted plastic waste will be used to grow food to be distributed to local food desert areas in a pilot lab called Plant-to-Plants. The lab will be developed to be replicable as a kit to any manufacturer wanting to capture carbon and give back in the form of food to their own communities disproportionately affected by plastic waste.

Currently, Lake Erie is not being continuously and consistently monitored for plastic and waste pollution due to limited measurement capabilities beyond the assessment of Presque Isle Bay. Gannon University’s Environaut education and research vessel is past its end of life, is limited to the Bay, and is at capacity for days at sea.

The partners in this element of RESOLVE, specifically, the Erie Western PA Port Authority, Gannon University, and Penn State Behrend, seek to measure the effects of Lake Erie water and air quality on a year-round basis using a deep-water science ship (which would be the only ADA-compliant science ship on the Great Lakes), a second vessel to replace the Environaut, and a third vessel for shoreline research in addition to drone technology to develop standards of measurement for lake health. The shallowest of the Great Lakes, Lake Erie experiences changes faster and more acutely than the larger and deeper Great Lakes, making it possible to more quickly assess the impact of new manufacturing practices and technologies on lake health.

While much of the focus on investment in the region has focused on Erie’s downtown core, rural areas lack basic infrastructure such as broadband, telework capacity, and site development that will allow them to contribute to the region’s economic resurgence. The lack of broadband negatively affects business attraction directly as well as telework capability, which supports new business activity through the attraction and retention of talent.

Impact Corry is now addressing these gaps with installation of a Gig Fiber Network and reimagining of a vacant hospital facility to be renamed the Corry Area Technology Center and Hub or CATCH. The hub will be home to a high-speed fiber internet and cloud storage system to serve Corry city residents and businesses and ultimately throughout the Corry and Union City area school districts. CATCH also will house a technology incubator, technology job training, remote career training, co-working space, and a day care center focused on early technology education.

Initially supported with funding from the Erie County Gaming Revenue Authority and bolstered by follow-on funding from university, industry, and federal sources such as the Economic Development Administration and the Appalachian Regional Commission, the Innovation Beehive Network is now held up as a national best model of university collaboration and innovation economic development. Partners Edinboro University of Pennsylvania, Gannon University, Mercyhurst University, Penn State Behrend, and the Blasco Library now have a mature model that has delivered an 11x return on the original investment as well as an impressive record of startup, existing business, and talent development. The Network is now shifting from seed funds to more sustainable models such as operational endowments.

For as long as a decade, each of the partners has been progressing incrementally on their areas of strength that will support the RESOLVE strategy. As supply chain disruptions occur due to the adoption of electric vehicles, the window to compete with efforts being undertaken in areas such as North Carolina is shrinking. Implementation of RESOLVE needs dedicated and consistent investment at local and state levels to ensure the Erie region and Commonwealth can compete.

Project RESOLVE is a 10-year vision that requires value mapping of resources to sources. Penn State Behrend has a proven record of attracting companies such as Truck-Lite and SKF to the area—and of creating a strong return for investors who value indicators such as additional external investment, economic growth, adoption of inclusive regional collaboration models, and talent development. Behrend is the Erie region’s R-1 University, with the unique ability to match research and donation investments with enthusiasm equal to that of its funders. The college’s niche investments in plastics and its strong ties to industry are decades in the making and not easily replicated. These factors combine to make Behrend the natural advocate for and leader of Project RESOLVE.

Penn State Behrend is advocating for and driving RESOLVE as a priority project for the region, given the strategy’s alignment with the college’s research thrusts of plastics, environmental science, and health.  As the lead applicant for the U.S. Economic Development Administration’s Build Back Better Regional Challenge team, the Behrend team continues to work with a diverse range of partners from Gannon University and Impact Corry to the Erie Western PA Port Authority and myriad industry partners. The 63 letters of support gathered for the Build Back Better challenge included twenty industry partners, supporting Project RESOLVE with pledges of matching investments totaling more than $21 million. 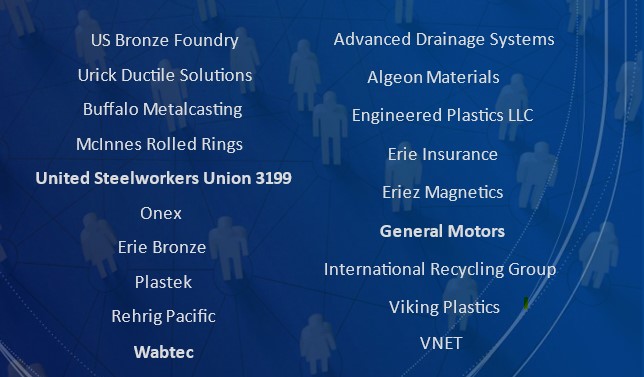 Realizing a 10-year vision requires prioritization of assets. The priority for plastics, metal-casting, and transportation industries will be the Center for Manufacturing Competitiveness. Once built, Behrend and its partners can leverage its infrastructure to acquire equipment and research talent to bring it fully online. Timing of this project’s implementation is short. The region’s manufacturers need to adopt next-generation technologies and practices as the adoption of electric vehicles has disrupted the supply chain –the very supply chain in which these manufacturers are involved. Without change, the new supply chain will migrate toward areas of the United States that are already implementing first generation, energy-efficient, and smart manufacturing facilities. The laboratories in this new Center for Manufacturing Competitiveness will serve a critical function as a technology development sandbox where industry, faculty, and student talent work side-by-side to shift economic and manufacturing operations from a linear to a forward-thinking circular model.