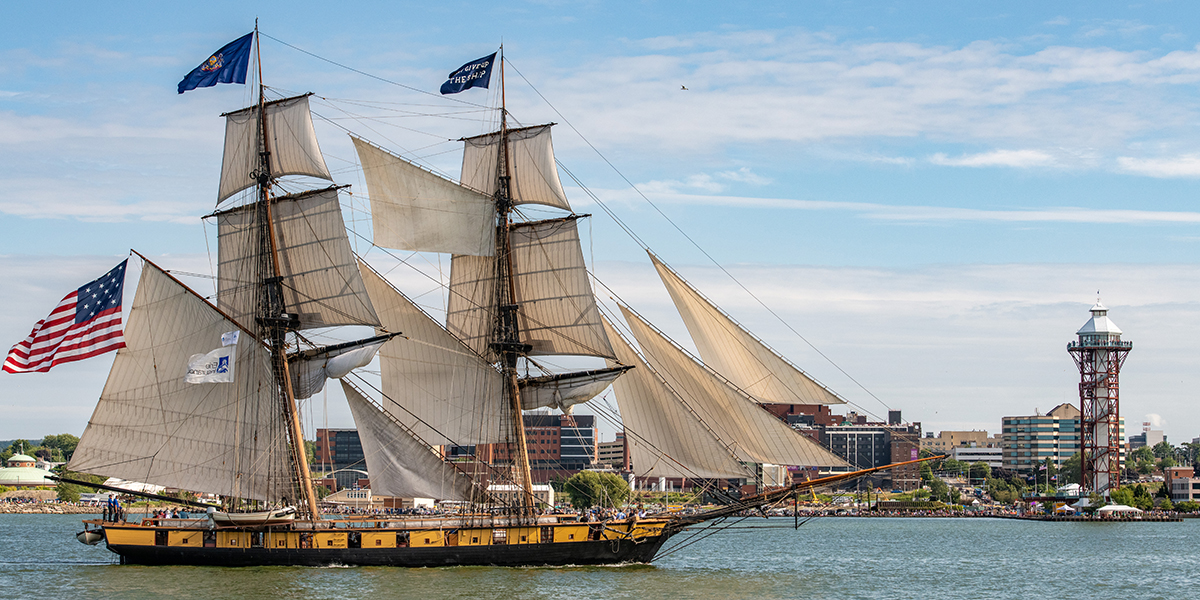 Erie County derives its name from the Eriez Indians, who settled on the fertile lake shore. In the mid 1600s, the Eriez tribe was conquered and destroyed by the Iroquois Confederacy.

A century later, the French built Fort Presque Isle, on Presque Isle Bay in the modern-day City of Erie, to shore up their campaign to seize control of the region. The French soon cut 15 miles through the wilderness to add a second fort, Fort LeBoeuf, in what is now Waterford. These two forts proved essential posts as French and British forces battled for territory in the late 18th century, until the French eventually abandoned their interests in the region.

The fledgling settlement of Erie County, with miles of Lake Erie shoreline and a natural, protected harbor in Presque Isle Bay, quickly grew. Settlers came in to clear acres of inland areas for farmland, and the ports became hubs of commerce and shipbuilding.

By 1812, when war broke out with the British, Erie County was just getting its footing as a port town. But citizens rallied to the cause and quickly organized a company of minutemen. One citizen, Daniel Dobbins, was even more strategic, and successfully lobbied the U.S. Navy to build the American fleet in Erie’s shipyard. Erie’s docks hummed with activity, turning out gunboats and brigs that proved pivotal in later skirmishes. The brigs Niagara and the Lawrence, which Commodore Oliver Hazard Perry led to victory in the 1813 Battle of Lake Erie, were launched from Dobbins’ shipyards, securing Erie County’s place in the history books. Today, the U.S. Brig Niagara, a wooden-hulled replica of Perry’s flagship, sets sail on Lake Erie and docks in Presque Isle Bay, keeping that maritime history alive in Erie County.

History of the Courthouse

The original Erie County Courthouse, erected in 1808, was a plain brick structure in what is now West Perry Square. After an 1823 fire destroyed that building, a second, similar structure was built near the same site. By the 1850s, the growing county had outgrown the small brick building, and county officials made the decision to build a new structure a half-block west, on West Sixth Street.

That building, which cost the county $63,000 to construct in 1852, remains today as the west wing of the existing courthouse. In 1889, the building was expanded north and east, with a large courtroom added on the second floor.

The county continued to outgrow the building, and the current east wing of the courthouse was added in 1930. In 1977, the county constructed a five-story addition on the north side of the building.